In the time of Jesus, words were important. Without modern media and in a culture where literacy was at a premium, the spoken word was the only sure means of communication. Words could command, they could instruct, they could heal. The spoken word revealed one’s inner power, one’s character.

The people who heard Jesus teach and saw him heal in today’s Gospel story from Mark 1:21​-28 were said to have been astonished and amazed by the authority of his teaching. So compelling were Jesus’ words and actions that the news about him could not be contained; it spread quickly throughout all of Galilee. Over two thousand years later, the news about Jesus continues to spread as we participate in sharing the Good News of Jesus with others in our words and in our deeds. May our lives be a testament of the power and authority of God at work.

Today’s Bible story from Mark 1:14-20 describes Jesus calling a group of fishermen—Simon (Peter), Andrew, James, and John—to follow him. It’s a story found in all three of the synoptic Gospels (Matthew, Mark, and Luke) with some variation, but two important commonalities. The first is the idea that these fishermen would no longer work to catch fish, but instead “fish for people” (Matthew 4:19; Mark 1:17, Luke 5:10), while the second (and the point I focused on in today’s message) is that these men left “everything”—their jobs and their families—behind and followed “immediately,” “at once,” “without delay.” Reflecting on this passage, I wonder sometimes whether I would have responded as Simon, Andrew, James, and John did. Would I have really just walked away “immediately?” It was risky business giving up a livelihood. And what about their families? The way Matthew and Mark tell the story, it sounds like James and John simply walked away from their father Zebedee—leaving him behind in the boat. Could I have possibly done the same?

We don’t know what went through these first disciples’ heads, why exactly they responded in the way they did. I imagine that as they spent time with Jesus there may have been days when they wondered if they made the best choice—especially when they saw him arrested, beaten, tried, crucified, and buried. But was it worth it? The fact that we know the story of Jesus, the fact that we can read about it in our Bibles today, proves that it was.

As I tell the children, “Jesus does not promise that following him will always be easy,” and indeed, there will be times in our lives where it will require more than we wish to give. It can be risky business. Is answering Jesus’ call on our lives worth it?

As one of the founding professors of my divinity school used to say, “Answer the call…It’s worth a life.”

Today we read of Jesus’ first miracle in the Gospel of John—the turning of the water into wine at a wedding feast in Cana. When thinking of Jesus’ other miracles—the healing of the sick, the casting out of demons, the raising of the dead, calming storms and walking on water—this one seems to be a strange one. Why is it included? As we may remember, John doesn’t refer to any of the “miracles’ in his gospel as such. Rather, he calls them “signs.” And as he writes in verse 11—the turning of the water into wine is “the first of the signs through which he [Jesus] revealed his glory.” The glory, as we read back in John 1, of the “one and only Son, who came from the Father, full of grace and truth.” (1:14) And as a result, the disciples believed

As you may have realized, over the past few weeks the scripture passages used on Sunday morning and at our Christmas Eve service have come from the first chapter (or two) of either Matthew, Luke, or John—telling us the “back story” about Jesus’ life. Matthew and Luke contain background information about Jesus’ earthly family and God’s intervention in their lives, and tell us not only the birth narrative, but also about the first people who encounter the babe—the shepherds and Simeon and Anna in Luke, and the Magi in Matthew. Similarly, John gives us the “back story” about who Jesus REALLY is—the Word of God made flesh.

Mark, however, is different. In his brusque, “just the facts, ma’am” fashion, he opens his Gospel with these words: “the beginning of the good news about Jesus the Messiah, the Son of God”—and then jumps right into a (very) brief retelling of the first story we have of Jesus as an adult—his baptism.

As I tell the children, we shouldn’t be surprised to find differences in each of the Gospels. Each book was written by different people for different purposes. Taken together, though, their function is greater than what they accomplish alone—giving us a fuller, more complete picture not only of who Jesus is, but also of God’s great love for us—the promised Savior, the newborn King, the Word made flesh, is God’s own Son sent not to condemn the world, but sent so that the world (and we) might be saved through him! (John 3:16-17)

If you’re like me, you probably didn’t grow up observing the full 12 days of Christmas, much less Epiphany—the church holiday that will be celebrated on January 6th that marks the conclusion of the Christmas season. For many Christians, the magi’s visit to the baby Jesus (which Epiphany commemorates) is often lumped into our nativity scene instead of being marked as the separate, later event it likely was (scholars tells us Jesus was probably a toddler when the magi arrived). Yet, there is something to be said for making note of this day and what it celebrates—not only the Magi’s epiphany as they understand the meaning of the star and come to worship Jesus as a king, but also the larger epiphany revealed in the Gospel narrative (as today’s scripture text from John 1 attests)—the manifestation of God Incarnate in Jesus the Christ.

As the story of the Magi reminds us, we serve a God of revelation. The problem is that just as “it’s easy for Epiphany to get swallowed up in the return to work and school after the beginning of the new year,” the epiphanies of God among us are also often overlooked or easily missed “coming, as they often do, in the middle of our work week” when we’re too busy to even notice, much less “remember we’ve had one.”

The issue, I think, has to do with do with two things—attention and intention. That is, noticing the work of God around us—the new epiphanies God desires to lead us into—calls for us to not only pay attention, but also to be intentional about creating (as an article* I read this week noted) “practices that keep us grounded” in the epiphanies we experience so that “living in the afterglow” of each one becomes both a “habit” and a “choice that can be made even when the light of illumination has dimmed.” Though the author observes that “Benedictines do this when they choose to welcome every guest as Christ among them,” the truth is, we can too, when we commit to keeping the true Epiphany in view: God Incarnate not only come to be with us and to save us, but also to live within us and through us.

We serve a God of revelation. May this be a year of epiphanies as we meet God among us in unexpected and wildly rich ways. *Quotations from https://www.christiancentury.org/article/faith-matters/making-habit-out-epiphany

Today, we will be exploring together the story of Jesus being presented in the Temple. You can find this story in your Bible in Luke 2:22-40.

Feel free to download the resources that go along with today’s lesson. You will find questions for the adults to ask children, and questions for the children to ask adults! You will also find several family activities, a coloring page, some puzzles and activities by downloading today’s Children’s Ministry Resources.

This week we light the final Advent Candle—the Candle of Love!  Today I spoke with the children about the importance of names.  As our Bible tells us, when the angel appeared to Mary, and later to Joseph, he told them what to name their baby boy—“Jesus”—who would also be called “Emmanuel.”  These names are significant, for Jesus means “the Lord saves” and Emmanuel means “God-with-us.”  Indeed, Jesus was God in flesh and bone, come to be with us, to live among us, as one of us, to save us.

As we prepare to celebrate the birth of the Christ Child, may we celebrate God’s Love shown to us through the best gift of all—Jesus, Emmanuel—God with us now and always.  Amen.

Printable Together @ Home activities for your family can be found below.

This week we light the pink candle on our Advent Wreath—the Candle of Joy! (Pink symbolizes joy.) It is an assurance for us, as is the accompanying text from Isaiah 61, that we have reason to rejoice—for no matter how dire the situation—God has not abandoned us. Instead, God sent Jesus to rescue us—to proclaim our salvation, to heal us, to free us, and to comfort us. (In fact, Jesus stated at the beginning of his ministry [see Luke 4:16-21] that he fulfilled the prophecy of Isaiah 61!)

Today we light the second candle on our Advent wreath—the Candle of Peace.  As I discuss with the children, our world is often not a peaceful place.

Here are some resources to help your child in worshiping today: 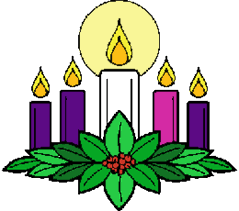 Here are some activities you could do together as a family. Begin with the story and then do as many or as few as you like, in any order. We will be exploring the promise of Jesus’ return! Look in your Bible at Mark 13, verses 24-37. Find activities and discussion ideas related to this week’s lesson in the attachment below.